The Liverpool Football Camp in England is open to boys and girls between 12 and 17 years old and provides young people who love football the chance to participate in a programme that combines football coaching with education courses and social activities.

This camp uses football as a vehicle for learning where young people take part in activities which will help them build self-confidence, learn values and improve their football skills under the guidance of the best professional coaches.

Download some information about this camp and read it at anytime. If you have already made your mind up, Sign up now!

Download PDF
Book now
Would you prefer it if we called you?

Ertheo now has a supervisor in England

During the month of July, we will have a supervisor from Ertheo in England to assist with any issues/emergencies, and if necessary, they can travel to be in person at any of our camps.

The supervisor speaks various languages and is available 24 hours!

The programme lasts two weeks and combines football coaching with English classes. This option is a great opportunity for participants to improve their level of English, not just through the 15 hours of lessons per week but also by the language immersion from taking part in the programme itself. As it is an international camp there are young people from many different nationalities, something which makes the experience even more enriching.

The camp takes place at Myerscough College, a fantastic campus in a semi-rural location north of Liverpool. On the campus are the sports facilities as well as the residence where students are accommodated.

The great attraction of this programme is the chance to learn to play football in the style of Liverpool FC under the guidance of the official coaches from that great Merseyside club. The Liverpool philosophy is known worldwide, constant work being the key phrase to describe the coaching methods made famous by the “reds”.

Myerscough College has great facilities comprising 20 hectares of sports facilities including a football pitch of third generation artificial turf and a sports hall.

Students at the camp receive the same kind of coaching sessions that are used to train the squad at Liverpool FC. The trainers have coaching qualifications from UEFA and the English Football Federation. During the 4 hours daily coaching sessions participants work on improving the key aspects of play, including exercises and repetitions designed to improve passing, shots and dribbling.

The coaches also spend a lot of time on tactical training to help participants learn about teamwork and the real situations that arise during a game. Physical and psychological preparation is another of the pillars of the Liverpool style, aspects like getting involved on the pitch, coping with the pace of matches etc.

The coaches continually evaluate students’ skills, identifying errors and helping them work on improving these in subsequent coaching sessions. There are 16 players per training group which are organised by age and level to ensure that the players training together have a similar level of skill. Depending on the programme you choose, students have between 15 and 30 hours per week of football training.

Liverpool Football Club has one more top level trophies than any other English team with the bulk of their success coming in the 1970s and 1980s.

Liverpool were founded in 1892 and have played their home matches at Anfield Stadium ever since. The club’s anthem and motto is ‘You’ll Never Walk Alone’ and the team are known as ‘The Reds.’

The Reds has two famous rivalries, the first, with city neighbours Everton, whose stadium is situated on the opposite side of Stanley Park in Liverpool; and the second, with Manchester United, the only English club to have won more titles than Liverpool.

Over the years, Liverpool have become known for their distinctive ‘pass and move’ style of play and their never-give-in attitude. This resilience was on full display in the 2005 Champions League final against AC Milan when they came back from 3-0 down to claim their fifth European crown.

For those who are opting to study English, classes take place from Monday to Friday for three hours a day. Participants are placed in groups according to their age and English level and lessons are led by teachers who are native speakers of English.

The two week English course at the Liverpool campus uses a sports leadership-related theme. Lesson content includes subjects such as motivation, organisation and communication skills. The aim of this programme is to improve the students’ English skills with total immersion using teachers whose native language is English.

The principal elements are: planning and preparation of sports activities, group leadership, English vocabulary and practice and learning about UK culture.

Students are awarded a course completion diploma from SportsLeaders UK, one of the most recognised organisations in Great Britain in the field of sports leadership training.

The Liverpool camp also offers one of the more innovative sports leadership programmes in the UK oriented towards young people, with the “I CAN LEAD” course, designed by the organisation SportsLeaders UK. In this course, students take part in 3 hour daily sessions Monday to Friday which combines activities inside and outside the classroom. The aim of the course is to train the young people in leadership qualities which will be of benefit to them in the future and which will also help them improve their academic performance.

The key aim of the course is to support the personal development of the young people. Subjects covered include communication, conversation and financial management, health, physical fitness and good sportsmanship.

Participants learn how to organise sports activities which are inclusive and structured. In summary, the young people who opt for this course will experience a boost in their self- confidence and improve their future employability skills.

Participants at this camp have a busy schedule. From Monday to Friday, they attend English classes for 3 hours a day and football training for another 3 hours. In the evenings the camp staff organise a social programme so the young people can relax and have fun, while getting to know their camp mates.

At weekends there is a break from the hectic routine. The young people are taken on excursions where they can get to know the most interesting sights of Liverpool.

One of the excursions organised by the camp is a visit to the famous Anfield stadium, home to Liverpool football club. Visitors to this marvellous stadium will see the sports centre and museum where they will learn all about the history of this famous English club.

Other excursions in the area may include:

The location of the camp is Myerscough College, Preston, situated to the north of Liverpool. Myerscough is a huge 20 hectare sports complex comprising student residence, sports hall, gym and a number of golf courses. It’s a wonderful setting, surrounded by countryside and home to the National Arboriculture Centre.

Nurse: No
Doctor: No
Physiotherapist: No
First Aid Equipment: Yes

Myerscough College has its own residence where participants stay while at the camp. It is a secure environment and there is no travelling involved between the accommodation and the venues where the coaching or English lessons are held. There is also 24 hour supervision by qualified monitors, as well as CCTV surveillance of the venue. Students sleep in double rooms with shared bathrooms.

Myerscough College has fantastic, recently constructed sports facilities, including the latest generation artificial turf football pitch, a sports hall and gym as well as other sports facilities. The college is surrounded by trees and beautiful flora making it a beautiful semi-rural setting.

The residence has common areas where participants can relax and socialise, such as a common room with television, table tennis table and console. In addition there is WiFi throughout and the residence is supervised 24 hours a day by qualified personnel.

The closest airport are Manchester airport and Liverpool John Lennon Airport. Both are located about an hour away from the camp.

Prices are shown in Euros. Do you wish to see them in Dollars? Change to USD

The official rate of this camp is determined in POUNDS, so the final amount in EUROS may vary slightly due to the fluctuation of both currencies.

Included in the price

Not included in the price

Please see below available schedules and prices for this service:

* Outside the standard established times for arrivals and departures, the transfers service will incur an additional cost of £180 per person, per journey.

* Your price quote will contain the standard transfer cost. Once the dates of the flight are confirmed the price of the transfer will be adjusted accordingly

Through an international insurance company, we offer two different types of insurance:

If you want to rest assured that you can recover your money in the event that your child is unable to attend the camp because of unforeseen circumstances - our cancellation insurance policy may be of interest to you. More information here

We also offer a travel insurance policy that also includes medical assistance. Details of the full policy coverage can be found here

Steps to make a reservation for the camp

Once you have completed steps 1 and 2, we’ll send you a confirmation of your reservation.

Once you have received the confirmation, you can buy your transportation tickets. If you have reserved the transfer service, be sure to send us an email regarding the details of your trip so we can successfully transport you to the camp. 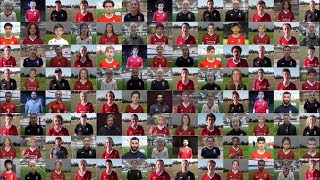 What should my child take to the camp?

How much money should participants take to the camp?

What sports kit or equipment is provided?

What's the accommodation like and it is far from the training grounds?