Any young person with an intense passion for soccer and a burning desire to become a professional soccer player will have to make sacrifices to reach the top. This could mean giving up free time, spending time away from home, or having a less active social life.

However, a player’s academic studies should not be compromised or neglected in the pursuit of a professional soccer career. Fortunately, besides the fact that an education will come in handy later on in life, academic study can improve your game and your intelligence on the pitch.

Rather than sacrificing academic studies, serious soccer players must learn to become experts in a balancing act between soccer and academics.

Related article: How train to become a pro soccer player while earning a world-class education

A balancing act: passion for soccer and academic studies

In the modern world, it is entirely possible for a player to balance a successful academic career with their passion for soccer and ambitions on the soccer field. In fact, for the most focused and dedicated players, the sky really is the limit. With the right attitude, a young person can achieve great things in more than one area.

A student that wants to become a professional soccer player should never limit themselves. They should have the mentality to push for the top and never settle for second best. By believing in their own abilities, a student can excel both on and off the field of play.

Join a soccer school! Train to become a professional soccer player and earn an education with your teammates

Interested in fueling your passion for soccer while training to become a professional soccer player and receiving a world class education?

Study can improve your game

Academic studies should not be seen as a hindrance to a person’s passion for soccer. Rather, they should be seen as a benefit. Intellectual stimulation can be an important aid in building the mentality of a winner. Academic success can often complement or even boost success on the soccer field. Players that study hard will learn to remain disciplined and focused, and may find it easier to develop the in-game intelligence required to effectively apply different techniques and tactics on the soccer pitch.

A well-educated athlete may also find it easier to cope with other aspects of being a professional such as dealing with clubs, coaches, accountants, agents and the media.

The importance of role models 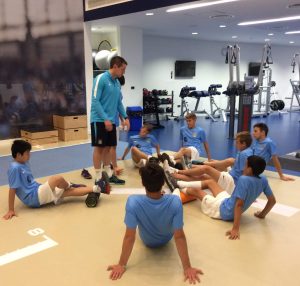 With this in mind, it is important that those people that inspire and influence budding young players, such as parents and coaches, emphasize the importance of a good education from day one.

A parent who gives their child all the tools and support they need to pursue career in soccer, should encourage them to succeed academically. Not only because it could help their development as a player, but also because become a professional soccer player is extremely rare and even the most talented players should have a plan B.

A solid academic foundation also allows a players to remain grounded and level-headed. These traits, along with exceptional sporting ability, will give students the very best chance of remaining on the right track.

The claim that academic study leads to greater success on the soccer field is backed by research. A study on this type of ‘dual career’ has been carried out by the Centre for Olympic Studies and Research.

The director of the centre, Professor Ian Henry, noted that balancing an academic interest outside of sport helps athletes “to put their training and performance into perspective, allowing them to deal more effectively with the challenges of sport, including setbacks and injury”.

The study also revealed that combining the two elements helps sports players to “refine and develops transferable skills. Skills such as planning and goal setting, team working, interpersonal skills, commitment, leadership and the ability to prioritize are requirements of success in both the academic and the sporting domains.”

In addition, the research made it clear that the combination of studying and training not only helps a player to keep a sense of perspective, but also provides intellectual stimulation, release from stress, and can actually improve their performance on the field.

Do you want to become a professional soccer player?

Whether your passion for soccer leads you to train to become a professional soccer player in the United States or in Europe, it’s important to explore your options for attending advanced professional level training while continuing your education.

High performance football academies in Europe or the FC Barcelona USSDA high performance academy are your absolute best options to earn a world-class education while highly increasing your chances of becoming a professional soccer player.

While it’s true that only 1.4% of soccer players who play in the NCAA go on to become pro soccer players (NCAA), and less than 1% of all the boys who enter a European soccer youth academies become professional soccer players, every graduate from the FC Barcelona USSDA high performance academy has earned a college scholarship or signed a professional contract.

Work hard to improve your skills by playing for youth teams, attending summer soccer camps abroad, and/or playing for a USSDA. Then join a high performance soccer academy in Europe or the USA.

You won’t regret your decision to fuel your passion for soccer while investing in your future on the soccer field, in the classroom, and eventually in the workplace.

For more information about any of these programs or advice about which high performance academy is best suited to your needs, don’t hesitate to contact us.

You can also send us an email directly to [email protected] or you can give us a call at: