Drones and Coaching – An interview with Coach David Powderly 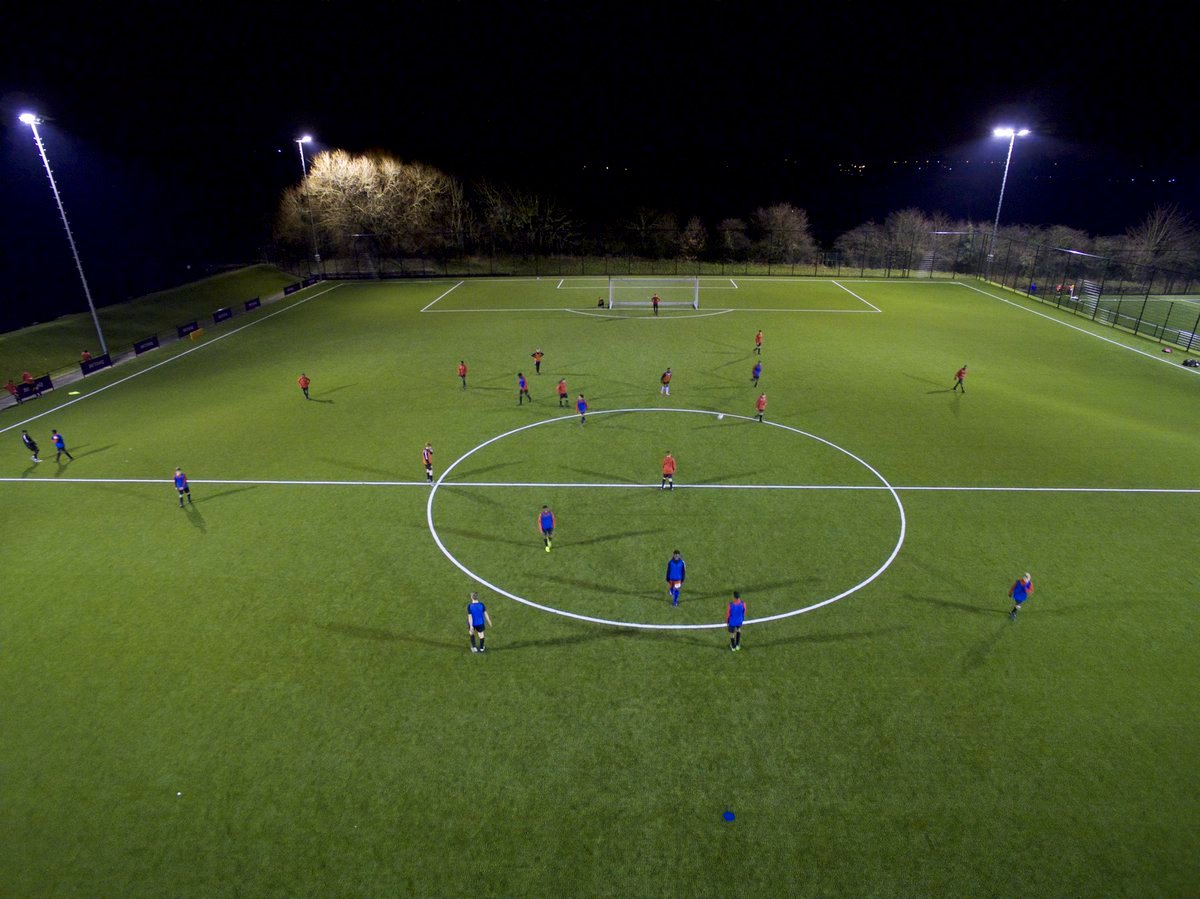 As teams seek to gain every possible advantage, football drone coaching methods are quickly being adopted by today’s progressive and forward-thinking coaches. We spoke to the man behind this innovative and exciting initiative.

For those involved in football coaching, watching a match or training session from the touchline seems like such a normal activity. After all, coaches from all over the world have spent decades pacing within their technical areas, observing the game from a lateral side-on view. But it has long been accepted that by watching the sport from this perspective, certain aspects of the game may be distorted or even hidden from view. And this in turn can lead to misinterpretation or poor analysis of a situation.

For football fans who attend live matches, the view can be equally distorted, with games observed from numerous different viewpoints and angles. At stadiums where one can observe the game from a higher angle, the distance from the playing surface then becomes an issue, as anyone who has watched a game from the highest tiers of Barcelona’s Camp Nou can testify.

Watching a game on TV provides a slightly clearer view of the game but most of the time, the camera only captures a limited snapshot of what is actually happening on the pitch, with off-the-ball movement and activity not visible to the armchair viewer. As a result, it is no wonder that elite football and sports coaches are now incorporating drone technology into their coaching regimes.

The benefits of football drone coaching are clear: there is no better angle from which to observe movement, positioning and space within a game, than from directly above. But for drones to be truly effective, expert knowledge is needed.

Not only to operate the equipment, but also to understand how best to gather and interpret the data. This is where people like David Powderly come in. Not only is David a licenced UEFA coach currently working at Charlton Athletic, but he is also a fully-qualified and CAA-approved drone pilot. David’s company DPY Productions are already the leading players in this innovative field, and with a host of top clubs and internationally-recognised coaches already keen to find out what the technology can offer, 2017 looks set to be the year that drone coaching in football really takes off.

To get a better idea of how and why this technology will soon become an essential apart of the coaching toolkit, we caught up with David to grab a few words.

⇒ Hi David, drones have become extremely popular in the last couple of years – almost like a craze. But we are now seeing more and more practical applications. How did you first get involved with using drones and what gave you the idea to use them as a football coaching tool?

It all began on a night back in 2015, when Barcelona coach Pep Guardiola went man-for-man at the Camp Nou in a Champions League game against Bayern Munich.  For 20 minutes, I found myself gripped by the tactical exchange, as seen on the live TV coverage. The clearest view came from the overhead camera, enabling me to see the position of both teams fully set out across the pitch.

That’s when it struck me: Could I find a way to reproduce such angles that would enable me to see the game in alternative ways? Furthermore: Could I achieve this without losing sight of the bigger tactical picture?

In my search, I came across Go-Pros and Hi-Pods, however these devices were too restrictive. They didn’t allow me to have freedom when recording a game. As I searched on YouTube, an advert from DJI regarding drones popped up on my screen. My curiosity had now turned to full attention, and I ended up purchasing a Phantom 3.

⇒ So with drone now in hand, how did you embark on developing a strategy that would catch the attention of top coaches? And what solutions do you discover a drone could provide that those coaches would not be able to find elsewhere?

A drone’s ability to capture action in matches and training sessions from all angles makes it a potentially indispensable tool. As coaches, we all aspire to gain those small margins that increase player performance as well as team performance. By using a drone to capture aerial images, we exponentially increase our ability to review and analyse performances as we look to enhance our player’s ability and game intelligence.

Within training sessions, coaches can review the session with players to analyse positioning as well as decision-making. For example, I had a conversation with my centre midfielder where explained: ‘”You need to move contra from the ball when the centre-backs are bringing out from the back.” He responded: “Yeah, I understand.” We later reviewed this objective together by watching the drone footage of the training session.  This clearly showed him how often he was out of position. He then acknowledged: “Oh my, I see it now!” From that point on, the player has fully trusted my judgement as his coach, because I can back it up with solid evidence – the drone tells it like it is!

As well as providing a more general aerial view, drones also have the capability to move directly above where the action is taking place. For example, the latest models can hover above fast-moving players rather than simply staying fixed in one position (a limitation that defined the Hi-Pod). The creative possibilities for using this feature of the technology, is something early adopters are only just beginning to explore.

⇒ Of course it is still early days but how are drones typically being used as part of a coaching sessions today?

They can be used in many areas. Personally, I have used them to look at positional play, defending with a low block or looking at ways in which we can press high when the opposition has a goal kick.

When I was consulting with Barcelona, they were keen to use it this way, as they often come up against teams that use a deep block. Therefore, the drone can provide them with a great view to seek spaces in between the lines in which to penetrate.

In addition, they can be used to focus on different units throughout the game, whether that’s analysing the back four or midfield or looking at how the goalkeeper deals with shots and crosses.

⇒ Once the session is over, how is the information then gathered from the drone? And how is it then reviewed and analysed?

The Information is gathered on an SD card as well as being cached on the device in order to see the footage live. We then use Sports Code as well as Final Cut Pro to edit, and I have just started using ChyronHego, a coach paint tool, which is the best software I have ever used.

⇒ Okay, the technology sounds great but what are the drawbacks? For example, are there any limitations in terms of battery life?

Battery life is increasing all the time with models typically operating between 20 and 30 minutes. However, there is new hardware available that connects via a tether and keeps the drone flying indefinitely. Unless of course it rains!

⇒ What teams are already using football drone coaching technology and what has the response from coaches been like?

Teams such as Ado den Haag, Belgium, Swansea, Napoli and Hoffenheim are using drones as well the Welsh FA. I have also spoken with Gareth Southgate and Rhys Long at The FA, and they like the idea and are looking to introduce it across the national age groups including the men’s team. Coaches love the view because it brings a whole new perspective to training. At first, some are a little sceptical, but when they see the view it offers, they want to use it as much as possible

⇒ With more and more coaches embracing the idea, how do you see the application of this technology developing in the future?

I see drones being used to track data. For example, the number of shots, passes or crosses that are made in a game. With the increase in battery life, this will only increase the use of drones in training sessions.

In 11v11 games, modern teams play in a variety of formations. For this reason, it’s vital that academies look to create versatile players who have expertise in a number of positions on the pitch. Using drone footage can help achieve this by allowing players (together with their coaches) to clearly analyze their roles and responsibilities, therefore accelerating the acquisition of knowledge. In addition, drone footage has potential as a means of preparing players for a training session or an upcoming match.

To explain further, imagine a right back is asked to “play up” an age group. The coach can review his roles and responsibilities in advance and highlight positive examples of the player’s positioning and movement based on previously-shot footage.  Following the game, the coach can further reinforce learning by reviewing the performance and comparing it. This will assist the player to clearly see the challenges, and roles and responsibilities of playing within the team. If this process becomes part of the coaching methodology, it has the potential to encourage more players to prosper and consistently play up a year – a very positive sign, not only of the quality of the players, but also of the coaches working within the academy.

You can follow David and his company at the following social media accounts: