General Fitness and Conditioning for Youth

The benefits of physical activity, for children of all ages, have never been questioned. As soon as children learn to walk parents want them to engage in a variety of physical play. Learning to run, kick a ball, and to climb on a playground are all part of a healthy childhood. As children grow up their participation in youth sports increases, and with these increases comes the natural progression to compete against other children. This leads to:

Parents and coaches quickly realize there is a natural separation among the participating children, not only among teammates but between competing teams. 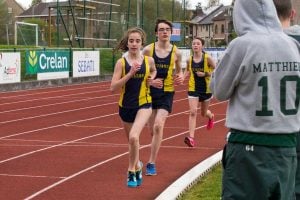 Any athletic trainer agrees there are only so many sprints and endurance exercises that can improve a youth athlete’s performance on the pitch, on the court or in the pool. Exercises that increase a child’s musculoskeletal (bones, muscles, and joints) health will result in an increased performance level. In fact, the World Health Organization (WHO) stipulates this type of exercise be part of an overall exercise program for young people aged 5-17. So, why are there so many objections to adding this training method to youth athletic culture? 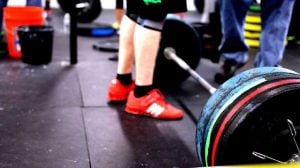 There have been decades of miscommunication and misleading information on the subject of strength training. Many believe the words strength training and weight training are inseparable. A huge reason for this happened three decades ago when the American Academy of Pediatrics issued a recommendation against strength training until young people reached full physical maturity. The academy’s declaration was intended to dissuade young people from weightlifting and competition in such areas as powerlifting or bodybuilding. The truth is there are other types of strength training that do not require weights as well as training involving light resistance methods.

The world-renowned Mayo Clinic, located in the United States, now favors exercises featuring light resistance, and controlled movements which emphasize proper technique and safety. In addition, exercises that use resistance bands and body weight are encouraged.

The ‘Pros’ of Strength Training

Coaches and parents should not let the term strength training be intimidating or inspire fear when concerning youth athletes. The list of the following exercises is broken into age-specific suggestions.

SQUAT CATCH: In a squat position (feet spread slightly wider than shoulder-width apart, toes forward and the athlete squatting down – knees bent to create a 90-degree angle), the athlete catches a ball with both hands. Bringing the ball into the chest, the athlete returns the throw with both hands, rolling the hips slightly upward and toward the target. The ball is released by both hands (without lifting the feet of the ground). The athlete returns to the squat position to receive the next throw. A light ball or soccer ball can be used and replaced with various sizes of medicine balls after the athlete is comfortable with the technique. Begin with three sets of ten throws, adding sets/number of throws as strength develops.

LEAPFROG: This exercise requires splitting athletes into twos. The first athlete kneels with his hands on the ground, elbows bent to create a ‘flat back.’ The second athlete is directly behind the first athlete and jumps forward, spreading their legs apart far enough to go around the body of the first athlete, and using their hands to slightly push off the back of the squatting partner. After landing in front of the partner, the jumper becomes the squatter, allowing the partner to perform the same jump move. Start with 3-5 jumps each and increase as stamina improves.

PLANKS: Have the athlete lay flat on the ground and then raise their upper body, having the elbow-to-hands on the ground while supporting the lower body with the toes on the surface. Make sure the athlete’s back is straight and their hips upward to create a flat back. Begin with the athlete holding in place for 10-seconds at a time with a 30-second rest interval. Repeat 3-5 times and gradually increase second/sets as stamina is built.

DOTS/HOPSCOTCH: Use a plyometric ‘dot’ mat or draw hopscotch squares. Have the athlete jump with one foot, hopping from dot-to-dot/square-to-square and return to the starting point. Alternate feet and then rest. The starting point is 3-5 sets. Add two feet hop, and different timing levels as the athlete becomes stronger.

PUSH-UPS: With both hands on the ground, slightly wider than the shoulders,  toes raising the lower body and feet close together, have the athlete raise their body up and down. Start with three sets of ten push-ups and gradually increase as the athlete becomes stronger.

MOUNTAIN CLIMBERS: Have the athlete start in the ‘raised’ push-up position, with their legs spread about shoulder-width apart. The athlete starts by bringing one knee to his chest and upon returning the leg, brings the other knee to the chest to simulate a climbing motion. Have the athlete perform this alternating action for 30-seconds. Rest for a minute and continue with another set. Increase sets/time for each set accordingly.

SPLIT SQUAT RAISES: Start with the athlete in the squat position and then ve them put one leg on a plyometric box (lowest box to start). Keeping the back straight have the athlete lower the knee of the foot/toes on the box until it nearly touches the ground, and then raise the leg back to the original position. Start with 2-3 sets of ten reps for each leg.

JUMP SQUATS: Starting in a squat position, the athlete jumps straight up (think to rebound a basketball) with both hands raising overhead. Upon returning to the ground, the athlete continues to repeat the actions for a 30-second period. Increase times/sets as athletic strength increases.

PELVIC BRIDGE: With the back on the floor, palms of the hands-down at the side and knees bent, the athlete will push up with the pelvis supporting their weight on the back of the shoulders and feet, which remain flat on the ground. The athlete holds the position at the maximum raised a point for ten seconds, releases back down and repeats five times.

HIGH-5 PUSH-UPS: This is a two-athlete exercise. Facing each other, the two athletes perform a standard push-up until they’re raised up. Then they take the right-hand cross over to ‘high 5’ touching hands, returning and doing the same with the other hand. This will develop greater strength/balance in a different manner than a traditional push-up. Start with two sets of 10 reps.

JUMP-TUCK: The athlete is starting in what is known as a good ‘athletic’ position (feet slightly more than shoulder-width apart, knees slightly bent, chest slightly forward with arms slightly bent and hands near the hips). The athlete raises their arms, hands approximately at the side, chest height, and jumps, tucking his knees into the chest and returning feet to the ground. Start with three sets of ten reps.

BURPEES: This is an exercise that combines the push-up, thrust back and returns, and jump squat exercises. The athlete begins in a squat position, lowers into a raised push-up while full squatting down, and thrusting legs back. The athlete performs the push-up. Upon rising upward, they bring their knees to their chest and jump up to a full extension with their hands over their head. Start the athlete slowly; making sure each part of the exercise is being done properly. Start with two sets of 10 reps and increase accordingly.

BOX SQUATS: The athlete, with arms folded across their chest, will squat until their buttocks touch the plyometric box, and slowly return upright. Start with three sets of 10 and increase accordingly. You can also add a medicine ball to add more resistance. 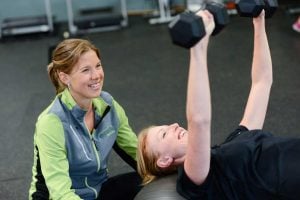 There are many exercises available that feature weightlifting. Using the guidelines set forth by the Mayo Clinic these are the basic rules to follow:

Strength training for youth athletes plays a very important role in athletic progress. It is an area that requires careful thought and must always take into account the specific age groups of the athletes. 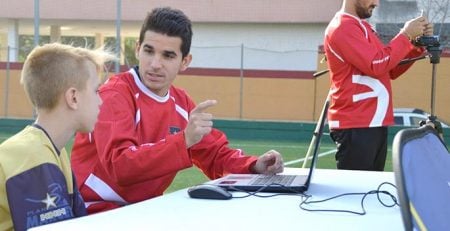 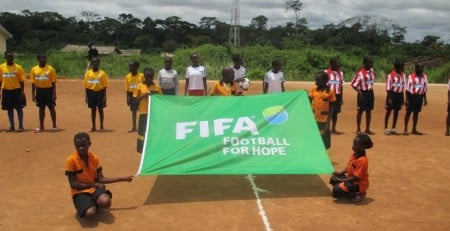 Our cooperation with the Non Profit Organization Red Deporte

At Ertheo we believe that education and sports are two fundamental pillars that a child must use in order [...] 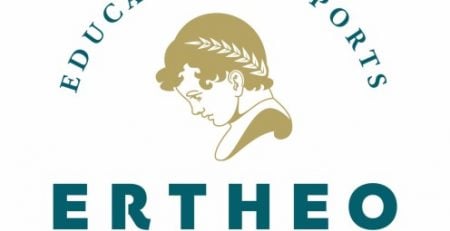 Caring for Young Athletes during the Coronavirus Pandemic

In the wake of the Coronavirus Pandemic, the sports world has come to a complete halt. Almost all sporting [...] 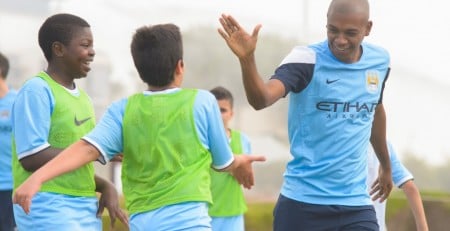 Making sacrifices to be a professional soccer player

If you want to become a professional football player, you’re not alone. Many young soccer players all around the [...] 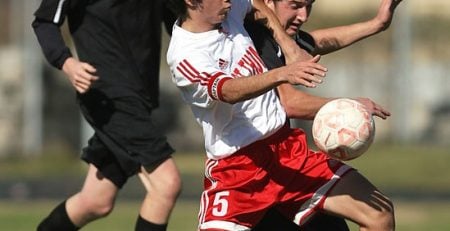 How to recover from soccer injuries

Regardless of how skilled, strong and athletic you are; you may sustain a soccer injury. Even the healthiest, most [...] 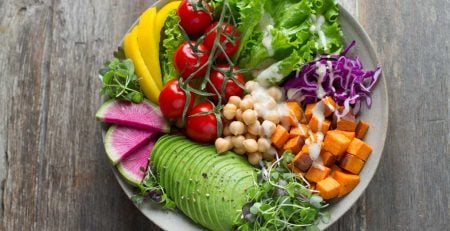 Is It Good for Youth Athletes to Be Vegetarians or Vegans?

If your youth athlete is dedicated to their sport and follows their coaches’ advice, then their success depends on [...] 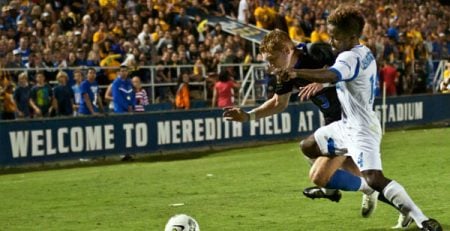 Calculate Your Chances of Getting a US Soccer College Scholarship

Not every professional footballer follows the same path to success. Some pros, such as Liverpool legend Steven Gerrard, are [...] 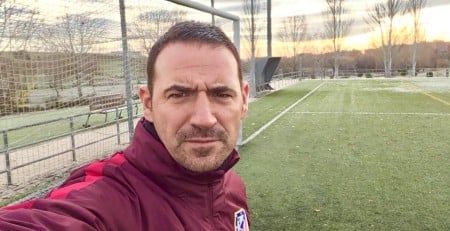 Alberto Ruiz is the coach of the Atlético de Madrid (cadets) and has extensive experience as a soccer coach, [...]

As children specialize in sport and join summer sports camps and programs earlier and earlier, child sports injuries are [...] 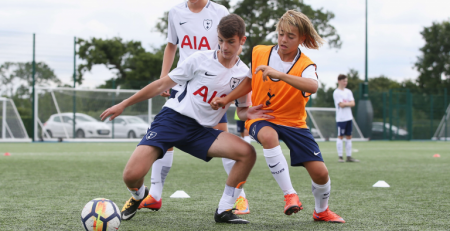 How to get a soccer scholarship to a U.S. university